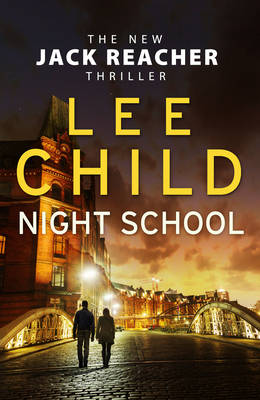 Just released is the 21st book in the Jack Reacher series of thrillers by Lee Child. This time round Reacher finds himself being awarded a medal for his last assignment the ‘quiet’ ceremony was barely over when he was told of his next assignment. Jack Reacher was heading back to School.

Set in 1996 and back during his army days this school though is a bit of ‘cover’ as he is joined by two others to form a three-man secret ‘ops’ mission to seek and find an American traitor. As yet they are not sure of the traitor’s true identity. Add into the mix that there is an Islamic terrorist group in Germany and that they met with the unknown American but what is it that he has offered to the terrorists? The asking price is staggering at $100 million. This man must be found and found quickly before he compromises the United States.

The three-man team including Jack Reacher are specialists in their fields and each is investigating in their own way. For Reacher he heads off to Germany but not alone and with him is Frances Neagley together they must seek the answers that will lead them to the traitor before something catastrophic takes place. This is a full on thriller and you can hear the clock ticking away in the background as time starts to run down. Can Reacher save the day? There are some rather interesting moments in the book as Reacher baits some Germans as war losers and not afraid of showing some select individuals just what he is made of. Even in 1996 you do not pick a fight with Jack Reacher and expect to win.

The one thing you can expect from Jack Reacher in a tight spot is that he will come through. So even at this earliest point in his ‘career’ you can just see the makings of what was to come in the years ahead. A thumping good thriller is what Night School is and if you have read any of the previous Jack Reacher novels then you must not miss this look back to his early days.

Thank you to Patsy Irwin at Transworld Publishers for the advanced review copy.

Night School by Lee Child is published by Bantam Press and is available through Waterstones, Amazon and all good bookshops.