Following on from her 2012 debut novel “The Lifeboat” which was in my view extraordinary and an incredible read, now just released by Fleet comes Charlotte Rogan’s latest Now & Again and if you enjoyed Rogan’s debut like me then this is one book you must add to your Summer reading list.

Now & Again although land based still delivers on a number of fronts that will have the reader thinking along the lines of justice, ethics & morals. Rogan’s latest is set during the last years of the presidency of George W. Bush and opens with Maggie Rayburn who works in a munitions plant discovers a cover up after finding a secret document, smuggling the document out of the plant means her life is about to be turned on its head. After spending time working through the detailed report Maggie comes to realise that there is a more than just a cover up involving her employers and now starts to realise that there is a connection to the environment and birth defects and all this stems from the munitions plant and the work carried out there. 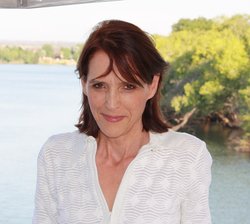 For the community of Red Bud, were they rely on the plant for work, Maggie comes to realise very quickly that the locals are turning against her but Maggie is not one for burying the evidence and her quiet steely resolve makes her a character that you want to get behind and will want to support as she goes about uncovering the truth in a situation like this there is usually a price to pay and for Maggie that price is her relationships with her husband and teenage son.

Meanwhile three soldiers have returned home from a tour in Iraq but they are uneasy and what has gone on and are determined to tell the world the truth about the war headed by Captain Penn Sinclair they set up WarTruth.com. The three soldier’s role in Now & Again is well constructed and totally believable all are carrying the weight of burden on their return and want the world to know what is really going on in Iraq.

The opening scenes in Iraq are hard hitting and bring the story of the three returning soldier’s alive and also tells of how veterans are treated on their return home. Some may find the two separate stories here confusing and may be left wondering what the connection really is, but for me I think this just confirms my belief that Charlotte Rogan is an author of ‘our’ time and is telling a topical story from Maggie uncovering injustice on the home front to the story of the three soldiers and the war in Iraq.

Now & Again is totally absorbing to read and one that helps us to understand how we as individuals deal with our fight against all form of injustice in public life.

Thank you to Ursula Doyle and Zoe Hood for an advanced review copy.

Now & Again written by Charlotte Rogan is published by Fleet and is out now through Waterstones and all good book shops.